Sometimes if I have money burning a hole in my pocket, I'll trawl my local record stores on the hunt for things that catch my eye, which is exactly how I stumbled upon this release. 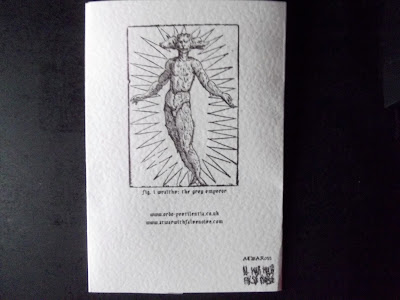 Creepy illustration printed on thick card, sealed with a wax stamp, of fucking COURSE I was intrigued! I had no idea what the band name was, what was in the package, what it would sound like, all I knew is that it looked more interesting than the endless jewel case CDs lining the racks of Avalanche Records. 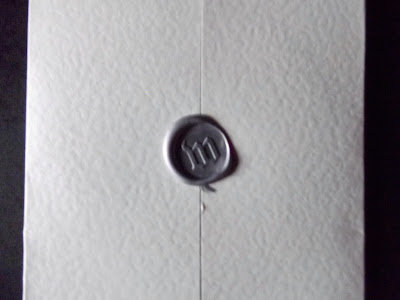 It's sat gathering dust on my shelves for months because, to be honest, I'm kind of intimidated by it.
I got it home that same day, opened it up to find no further clues beyond some obscure, arcane words of warning, and a CD. I popped the CD into my player, and the information it read was one single track, running time 57:55. 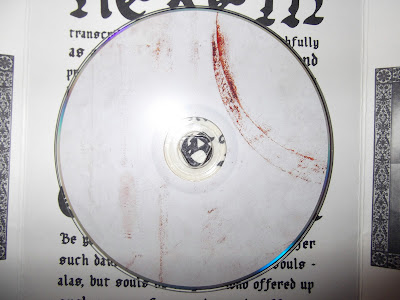 I had picked up a bunch of Discharge vinyl that same day and decided that even THAT would make for easy listening compared to this! So I put the CD back in the hand-assembled packaging, and put it aside, for another day when I had more time to dedicate to giving it a proper listen.

That day was over a year in coming. It lay forgotten on my dusty shelves until I unearthed it today. Guess it's time to creep myself out for an hour, huh? 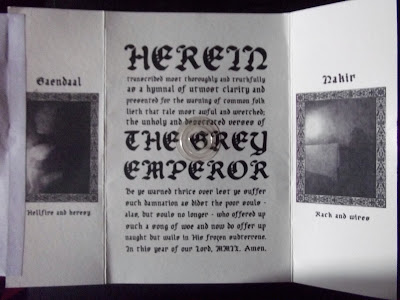 That intimidating 57:55 flashes up on my player again, but I won't wimp out this time. Play.

Silence fades in for a minute before an echoing sound approaches. The frequency of the noise increases, while a drone rumbles in the background. It sounds like a ritual drum in ruins. The rumble sounds like a great flame fanned by the wind. The drum pulses on. An electronic scree occasionally creeps in like a radio signal not quite within range.

Nine minutes pass before, faintly, barely audible, another sound strikes up. I can't discern what it is, but it has the slightest hint of melody. Or at least a variation on a note. The drum echo changes and dies, and the rumble looms large. It sounds like the wind is picking up.

Fourteen minutes in another steady pulse begins, this one deeper, like a regular dropping of bombs in the distance. It almost has rhythm. Almost. An abrasive signal noise scrapes in, increasing in volume before disappearing just as fast as it arrived. Despite the archaic wording and imagery used in the packaging of this release, it makes me think of a dystopian landscape, like an empty city with no survivors, remnants of a rescue signal echoing out into nothing. No supernatural elements, just a cold lifeless grey-skied future.

Like the saying goes, "If a tree falls in the forest and no one is around to hear it, does it make a sound?". The sounds I hear here are the steady pace of continued existence, but no actual life left. Like mechanized systems functioning long after their constructors have ceased to breathe. Nothing hears these sounds, but they are made nonetheless.

Twenty-five minutes. Whatever is happening is happening faster. Something is moving, more sounds join the fray, the wind keeps howling, but the howl sounds... alive. The recording of tortured cries.

Thirty-one minutes and the cry sounds like a rusted nail slowly being scraped along the hull of an enormous empty oil tanker. Whatever this has been building to, it's happening. Something sounds angry. The eponymous Grey Emperor sounds like a mean sonofabitch. What sounds like a wheel spinning creaks into the soundscape for seconds. The background is like a post-apocalyptic second wave of nuclear holocaust.

Forty minutes onwards play out with what sounds like the last munitions on the planet being fired across a great gulf, like gigantic fireworks. Inhuman screams and lamentations escape through rusted ruined tracheotomy tubes. The lungs they escape from fill with smoke and... silence. The fire in the wind rumble is all that's left. 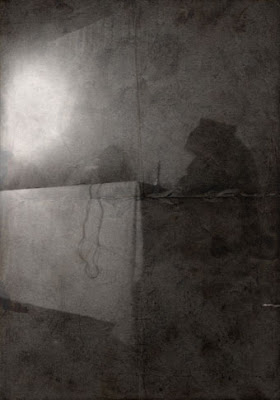 Well, that was a suitably pretentious account of something too unsettling to ever truly be enjoyed.
But if you want to put yourself in a mental institution, go out into the dark at 3am with these sounds in your headphones, and walk until you don't know where you are anymore. Your mind will break.

This creepfest is still available from the excellent, and local, At War With False Noise, who have released other great stuff like Ramesses' 'Take The Curse' and the forthcoming Uzala LP.
Get on over to their site and support other Scottish weirdos: http://www.atwarwithfalsenoise.com

And if ambient/drone/noise is your thing, check out Wraiths and other associated projects at Ordo Pestilentia
Posted by Ross D Mckendrick at 17:05